Punk rockers rejoice! Get your ass ready for the Hella Mega Tour, which brings Green Day, Fall Out Boy, Weezer & The Interrupters comes to Citi Field on Saturday 22nd August 2020! With each incredible band promoting a new album, this stacked line-up has to be one of the hottest rock shows of the year!

“It’s kind of a Green Day idea. And we talked about how we weren’t really wanting to do stadiums and do something that was like throwback to Monsters Of Rock Tour. There was, of course, Fall Out Boy and Weezer and now we’re stoked,” says Green Day frontman Billie Joe Armstrong. 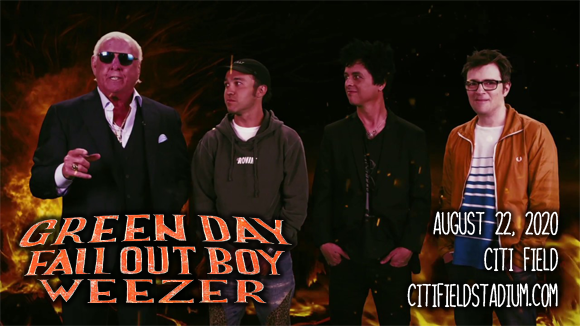 The Hella Mega Tour brings together three of the biggest names in alternative rock from the past 20 years: pop punk rockers Green Day, emo rockers Fall Out Boy and nerd rockers Weezer! Each band has been an instrumental influence in the modern rock scene, passing down a musical legacy that can be clearly seen in subsequent rock acts, and they each continue to create exciting and relevant new material. On the day the tour was announced, Green Day released "Father of All…" – the lead single from its 13th album, Father of All Motherf***ers; Fall Out Boy released "Dear Future Self (Hands Up)" from its second compilation album, Greatest Hits: Believers Never Die – Volume Two; and Weezer released "The End of the Game" from its 14th album, Van Weezer.